Just 54 acres in size, Samarai Island was once an important trading center, due to its location on the southeast coast of Papua New Guinea, on the China Strait between Australia and East Asia. It was discovered in 1873 by British navigator Captain John Moresby, who initially called it Dinner Island. Five years later, the establishment of a mission station here led to its development as a bustling port town and headquarters of an administrative district of British New Guinea.

In 1942, it was evacuated and its buildings were destroyed to prevent the island from falling into Japanese control during World War II. Rebuilt since — though not to the same scale as its glory days — the island was declared a National Historical Heritage Island by the government of Papua New Guinea in 2006. Take a stroll along the pleasant pathway that encircles its pretty town, view spectacular marine life on a SCUBA diving expedition, or simply relax on the beach. 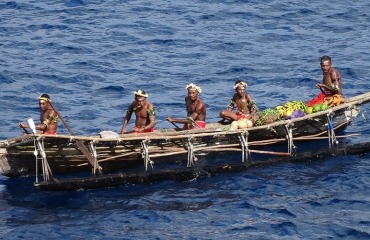