Born and raised on the island of Moorea, I have spent my first working years in my family's pearl business. But, during this time, I had a burning passion to become a chef. After 15 years in the family business, I decided to pursue my dreams and started my culinary journey by studying at the Pacific Culinary Institute in Honolulu, Hawaii. There I apprenticed under Chef Ed Kenney and Chef Dave Caldiero, both internationally recognized and award-winning chefs. My time spent in Hawai’i working with Chef Ed inspired me to mix traditional local cuisine with a modern twist. 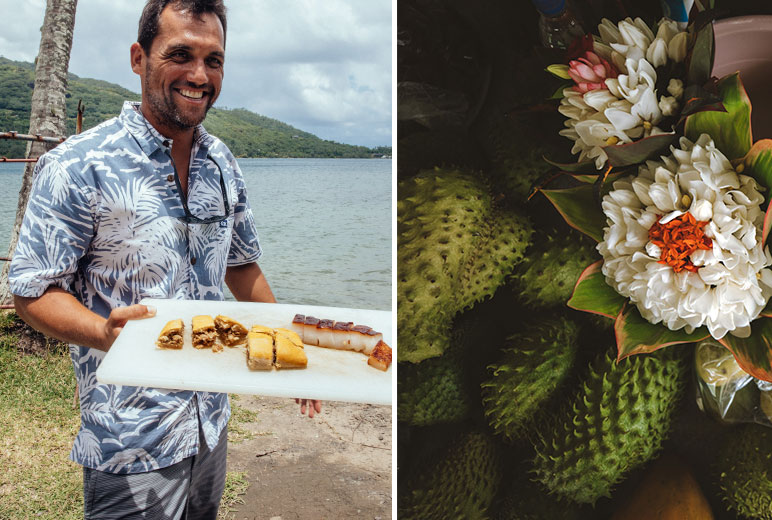 Tahiti has always been known for its beautiful beaches and colorful lagoons, and rightfully so. I have always felt that Tahiti had a lot to offer when it comes to its local food culture that people need to discover as well. Our Tahitian food culture is made up of three different yet complementary cultures - Tahitian, French, and Chinese.

Growing up here as a kid, some of my fondest memories and my inspiration for becoming a chef are the traditional Tahitian Sunday feast called the “ahima'a”, the traditional underground oven. This is where we dig a hole, heat up special porous rocks to a certain temperature, and cook our local foods inside. The ahima’a consist of pork and traditional starches such as Taro root, breadfruit (Uru), sweet potatoes (‘umara), and Po’e (fruit puree with coconut milk wrapped in banana leaf) among a few other traditional delicacies. The ahima'a meal today represents a family event that is not to be missed on Sundays.

Families come together to participate in creating this meal together, whether it be for big parties or for Sunday afternoons. It is a festive moment to savor local flavors, after hours of preparing the food and cooking it, resulting in incredible aromas and flavors.

Today, we celebrate a Tapati Tamaa, which is a spin-off of the ahima'a meal. Generally consumed after the pureraa (Sunday church service), constituting of fried fish caught that morning from the lagoon, with firifiri (local beignets), coconut bread made at the house, poisson cru made at the house with fresh coconut milk, one or two types of po’e prepared with a base of coconut milk and manioc starch is a typical Tapati Tamaa meal. What a delight for the tastebuds!

This Tapati Tamaa meal is a typical example of one of “syncretism” of Tahitian, European and Asian flavors, with each culture contributing their own foods and flavors. The main source of protein in Tahitian culture is pork and a variety of fish, among other seafood delicacies. Tahiti, with its 118 different islands and atolls, has a huge resource of seafood such as lobster, coconut crab, ature, Eina’a, mud crabs, Pahua(big clam), mussels, shellfish, and many different delicious reef fish.

The arrival of the first Europeans to the islands was the beginning of the change in the local food diet with the introduction of sugar, butter, flour, vegetables, coffee, and canned foods. When Chinese immigrants arrived in Tahiti in the late 1800s to work in the sugar cane and cotton plantations, they introduced rice, noodles, soy sauce, vegetables, among other spices and ingredients.

The influx of these foreign cultures to Tahiti created the beginning of the modern food culture of Tahitian cuisine. The fusion of these three cultures over the last century has enriched the local food scene and helped to give local cuisine new flavors, in combination with traditional dishes and products such as taro, breadfruit, and sweet potato.

With that said, it also altered the diet here with so much richness in the food preparations with sauces and starch that we enjoy very much such as the local street food. 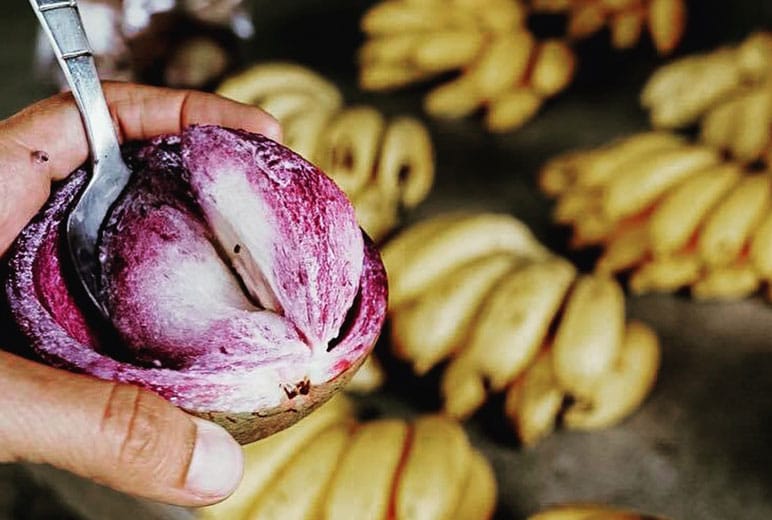 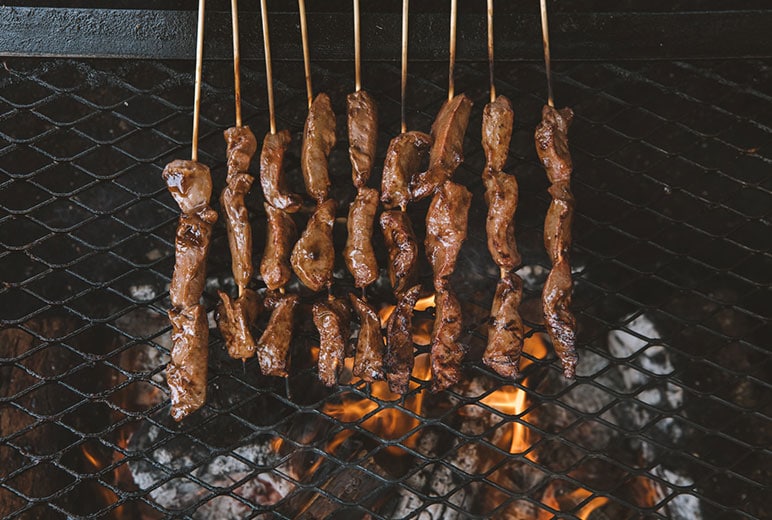 As visitors' curiosity for food grows worldwide, this will be a great opportunity to discover what we as locals like to eat and what our favorites are here in the islands. The foods that you will find are not what we eat at restaurants, but what we eat at our neighborhood snack shop, Deli, Roulotte (Food truck), or roadside stands. It is like going to your favorite little taqueria or pizza parlor, or hole-in-the-wall deli. Most visitors might not take the time to stop at these places or dare to try certain foods because of fear of not knowing what it is, and on top of that, there may be a language barrier. 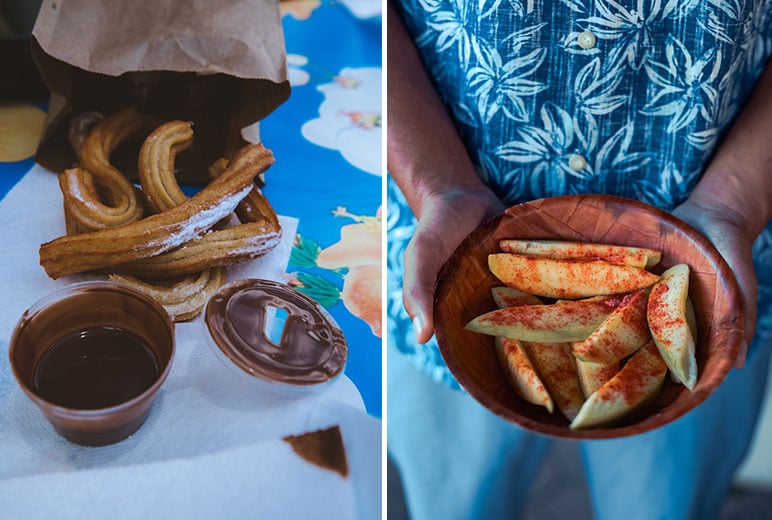 I always encourage visitors to go off the beaten path and go on a food adventure while navigating the different islands of French Polynesia. This will help take the mystery out of the food and help you understand what it is all about. This is a fun way to discover a true culinary adventure of island favorites, such as casse croute, Chao mein, Pai pate, ma’a tinito, poisson cru, pua roti, firifiri</em >, or seasonal fruits. Each group of islands has their own preparation for these different dishes.

What is exciting now is the new wave of young chefs returning to the islands from France or other countries or elsewhere with the knowledge and expertise that they learned from top restaurants and chefs abroad. There is something magical happening here in French Polynesia as a new vision of artisan cuisine is being developed with seasonal dishes by these chefs. Chef Teautearoa from Maru Maru restaurant - Chef Heiarii from HEI, Chef Kirahu from Kozy, Chef Tereva from Souffle restaurant just to name a few of the inspiring chefs.

As you can see Tahiti truly has a rich culinary history with traditional food, street food, and now gastronomy artisan cuisine to add to its dreamy beaches and culture. This is our story, so get out there and embrace the culinary adventure. 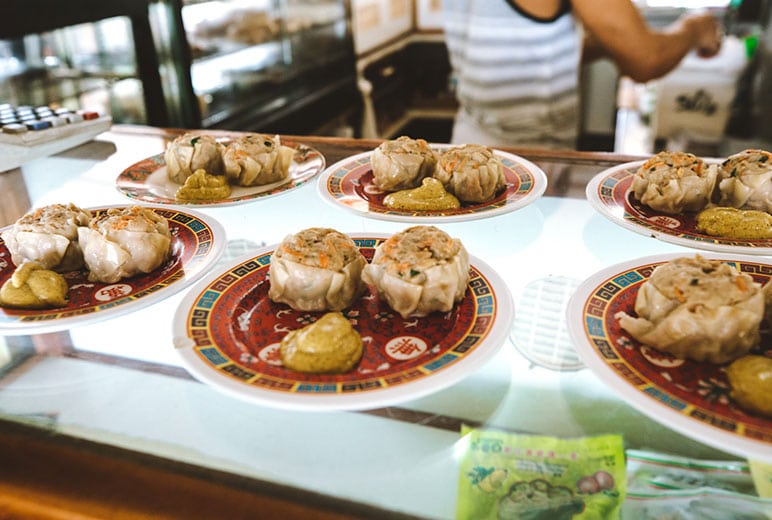