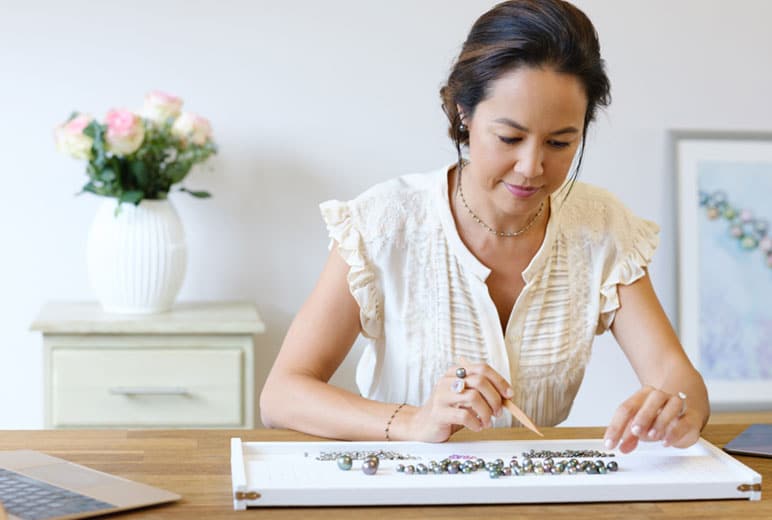 At the center of every Hinerava creation lies the Tahitian pearl, an organic gem that was once only found by chance through harvests of wild Pinctada margaritifera. Today, they are farmed in pristine lagoons in French Polynesia’s remote atolls. Tahitian pearls are arguably the most fascinating in the world as they occur naturally in superlative palettes, including green, cherry red, aqua blue, peacock, rose, and even violet.

Once a unique pearl is discovered, it becomes the centerpiece of the design. Its shape will dictate whether it is drawn into a necklace, a ring, or a pendant. If rare chance allows for two similar pearls to be discovered, then they may be mounted into earrings. Finally, precious gems are incorporated into the creation, often enhancing the pearl’s natural vibrant color.

As a designer, I search through thousands of pearls to select only a few for my designs. In my latest Poésie Collection, emerald green and rose pearls were chosen to complement bi color tourmaline gems. The finished jewels exude craftsmanship and timeless design.

French Polynesia is known for its crystal-clear water, white sand beaches, fragrant flowers, and of course Tahitian pearls. One can hardly visit Tahiti and not come upon a pearl boutique. Whether you are looking for sculpted art encrusted with pearls, casual leather bracelets with pearls, fine jewelry with pearls, or simply loose pearls — shopping for this local gem can feel like a daunting task. Becoming familiar with the characteristics that define the value of a pearl is a helpful way to shop with confidence. 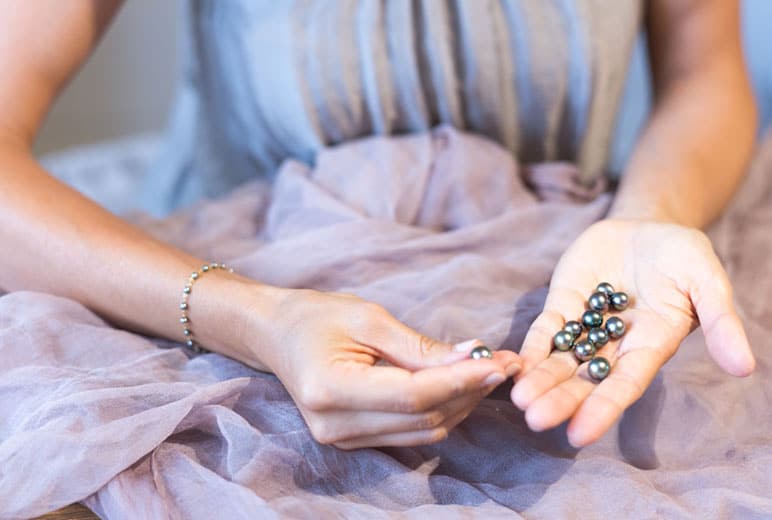 Most of us have heard of the 4 Cs for buying a diamond. Pearls also have important measures of quality that Hinerava defines as the 5 Ss: shine, surface, shape, size, and shade.

Shine, or luster, is arguably the most important criteria when selecting a pearl. The higher the brilliance, the more valuable it is. Pearls are made of an organic calcium carbonate substance called nacre, which envelops the pearl layer after layer in the many years it takes for a pearl to be formed. This process, under the right circumstances, creates the lustrous shine of a pearl and is a direct indication of its underlying quality. A healthy oyster produces higher quality nacre and the longer a pearl remains in its mother oyster, the more nacre it will have. Therefore, it follows that if pearls are removed from their oysters too soon, their nacre will be thinner, their quality will be lower, and so will their shine. The same holds true if the mother oyster is unhealthy due to parasites, polluted water, or suboptimal water temperatures. In summary, the more nacre a pearl has, the more luster it will also have, and the higher value it will demand. 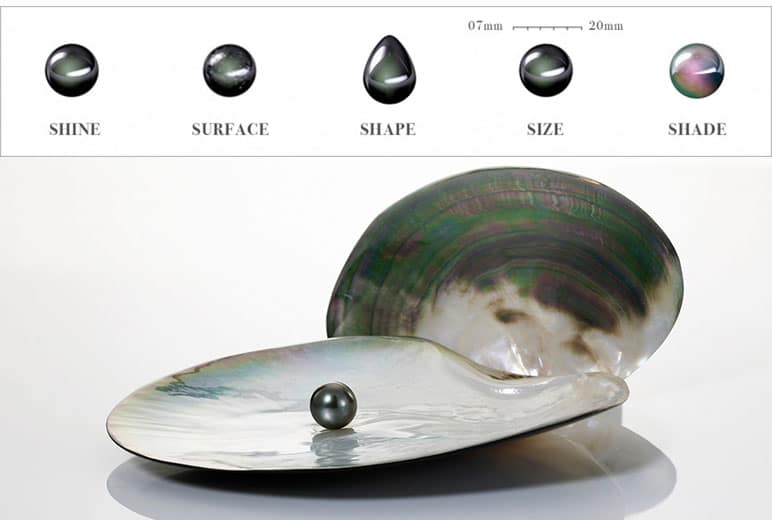 An untrained eye may have difficulty at first in deciphering between a pearl that has high shine from one that doesn’t. A simple suggestion is to look for your reflection on the surface of a pearl. A highly reflective surface equates to a lustrous shine.

Second to shine, comes surface. A pearl’s surface can be clean or spotted by “birth marks”. You should look for pearls that are free of spots, bumps, or cracks. Smooth pearls are more rare and therefore, the cleaner the surface, the higher the value.

Shape and size are two attributes that are often considered first when valuing a pearl, a novice misunderstanding. Pearls are often thought of as round, but they also occur in every shape from flatter button to irregular baroque forms. Round pearls represent only 5% of an entire harvest, therefore they are generally more valuable. You mustn’t however forget the last two characteristics: a round pearl that has low shine and low surface quality can be less valuable than an oval pearl that has high shine and high surface quality.

Next comes size. Tahitian pearls range from 7mm to 20mm, and those that measure greater than 12mm are deemed exceptional since they are rare and more difficult to culture. Once again though, an 8mm pearl with high shine and a clean surface can be more valuable than a 10mm pearl with low shine and poor surface. Therefore, size alone is not a sufficient guide to evaluating a pearl. 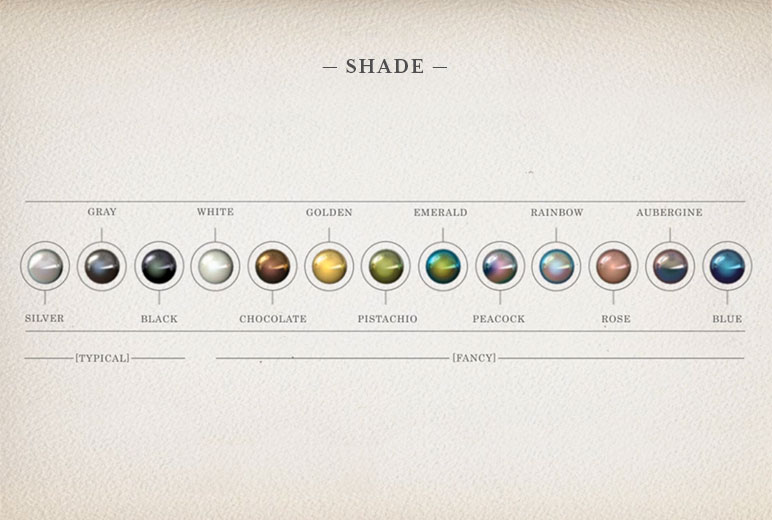 The final attribute and in my opinion, the most exciting, is a pearl’s shade. The color of a pearl results directly from the nacre color found inside the oyster in which the pearl is grown. The Japanese Akoya pearl oyster, Pinctada fucata, ranges in nacre color from white to grey. The resulting Akoya pearls are thus predominantly white to grey as well. Similarly, the Australian South Sea pearl oyster, Pinctada maxima and often called gold-lip oyster, ranges in nacre color from deep gold to creamy white. The resulting pearls reflect this range in color as well.

The Tahitian pearl oyster, Pinctada margaritifera or black-lip oyster, has a nacre color that is mainly silvery gray to black. As such, Tahitian pearls occur primarily in these silvery gray to black shades and are often generalized as “black pearls”. However, Tahitian pearls are unique among other pearls in that they also occur naturally in nearly every other color. Close examination of a Pinctada margaritifera shell reveals superlative palettes that can encompass the entire color spectrum. As a result, Tahitian pearls can occur in fancy colors including pistachio, emerald green, cherry red, aqua blue, peacock, rose, golden and even violet. These shades are rare and therefore more valuable. 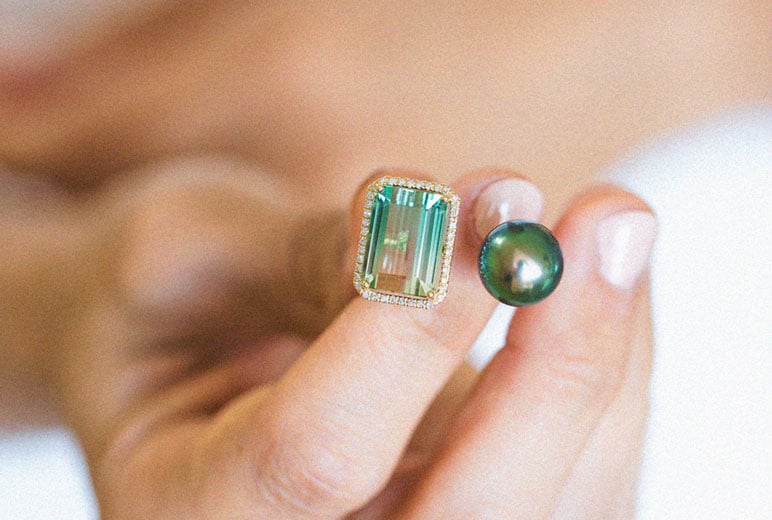 If your goal is to find the highest prized Tahitian pearl, then you should look for a combination of brilliant shine, clean surface, round shape, large size and rare shade. However, it is important to remember that exceptional pearls can be found in such a wide combination of the 5 Ss. In my opinion, your own personal preference holds the ultimate value.